Clinical Trials of Cassia Auriculata across the globe on diabetic control 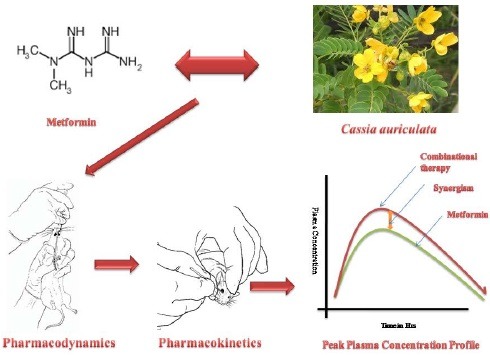 Findings: Cassia auriculata flower extract (CFEt), at doses of 0.15, 0.30 and 0.45 g/kg body weight for 30 days, suppressed the elevated blood glucose and lipid levels in diabetic rats. Cassia auriculata at 0.45 g/kg was found to be comparable to glibenclamide.

Findings: A concomitant increase in the antiperoxidative enzymes namely catalase, glutathione peroxidase and superoxide dismutase in serum, liver and kidney of CFP treated diabetic rats was observed. Also, an increase in the non-enzymic antioxidants, vitamin E and reduced glutathione and decrease in ascorbic acid was observed. This indicates that these herbal powders play an important role in scavenging toxic intermediates of incomplete oxidation in the body. Antiperoxidative effect of 200 mg CFP was much more significant than that of 100 mg of CFP.

“Cassia auriculata could have ‘active ingredients’ for treating diabetes”

The researchers at Greenwich aim to isolate and identify certain extracts from the plants Cassia auriculata and Cassia alata, which could have ‘active ingredients’ for treating diabetes. They discovered that one of the compounds isolated from the plant, kaempferol 3-O-rutinoside, has proved to be more than eight times more potent than the standard anti-diabetic drug, acarbose.

From the study, it was concluded that, our herbal DIATEA increases the plasma insulin and it was also observed to be hepato-protective, thus helping in treating liver injury. The results in experimental rats laid to an extrapolation that, the herbal DIATEA controls the blood sugar level in type II diabetes patients and pre diabetes cases by increasing the plasma insulin.

Aqueous extract of Cassia exhibited significant antihyperglycemic activity in normal and alloxan-induced diabetic rats. They also showed improvement in parameters like body weight and serum lipid profiles as well as histopathological studies showed regeneration of β-cells of pancreas and so might be of value in diabetes treatment.

*Disclaimer: The results may vary from person to person, depending on age, sex, body weight and a lot of other factors.*